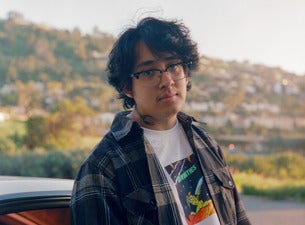 Every Cuco concert is about representation and inclusion. An all-ages crowd is the norm at a Cuco show, and you'll see his youthful contemporaries singing along to his cheekily romantic bedroom pop. Cuco's Omar Banos is a Mexican American from the Los Angeles area, and his music has become a calling card for diverse fans of all ethnic backgrounds. Coming out of the DIY house show scene in L.A., there weren't a ton of Chicano kids emerging to play sold-out shows at midsize venues all over the country, with songs regularly clocking 10 million listens on Spotify. But Cuco's earnest songwriting speaks to a new generation at an important time. On stage, he's unassuming, wearing baggy pants and hoodies, singing in front of woozy keys, wobbling synths, rhythmic drums and hazy guitar and bass. But that's the charm of Cuco — he's never tried to be anything besides his authentic self. And now with his debut LP, Para Mí, in tow, the intimacy of those early house shows in LA is still very much in the air wherever he's gracing a stage.

Omar Banos grew up in the largely Hispanic southwest Los Angeles city of Hawthorne. His parents were working-class Mexican immigrants, and Omar, a first-generation only child, played the trumpet in high school before grabbing a guitar and then learning how to use Ableton production software at age 16. Less than a year later, he dropped Wannabewithu, his 2016 debut mixtape as Cuco, and promptly went viral. The follow-up, Songs4u, is a reflection of the musical cultures that surrounded Cuco and inspired him growing up. Meanwhile, he's dropped a slew of one-off singles, including "Lo Que Siento," his biggest hit to date with over 50 million Spotify spins.