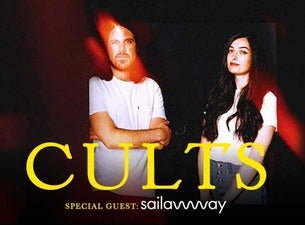 Indiepop band Cults set the internet ablaze with their 2011 self-titled debut, earning praise from bloggers and fans alike for their retro sound and infectious melodies. The year 2013 saw no slowing down for the Manhattan duo, as they released their follow-up, "Static," and its single, "I Can Hardly Make You Mine," which added a darker edge to their sunny pop. On tour, they've also added new layers by filling out their lineup as a five-piece and showing a more aggressive guitar sound. Visually, they've even added a wall of static-playing TVs behind them on stage to match the static motif. Concert fans concerned that all this detracts from singer Madeline Follin's innocent vocals need not worry. Her unique voice rises above it with an increasing power that reflects the band's overall growth. Other songs off "Static," like the soulful single, "High Road," and the bittersweet, "Always Forever," show that these artists aren't interested in repeating the same formula but in breaking new ground.

Founding members Brian Oblivion and Madeline Follin started Cults as a natural outgrowth of living together as a couple. The musical pairing led to almost instantaneous success with the release of "Go Outside" on Bandcamp. It became an immediate hit on the blogs, was the perfect summer song and soon led to a recording contract with Columbia. They followed up with their self-titled debut album and a long, grueling tour that eventually ended Oblivion and Follin's romantic relationship. They persevered as a band, though, and "Static" was the result. The new album and tour are showing these overnight successes are in it for the long haul, and fans getting tickets will see two artists who, while no longer a couple, bravely wear their hearts on their sleeves.