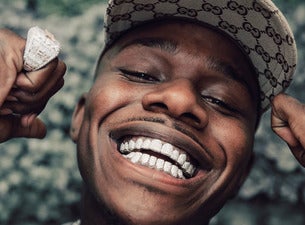 DaBaby's live show is full of the quirky, infectious energy that garnered him fame in music videos like "Suge," "Next Song," "Walker Texas Ranger" and "Goin Baby." He keeps the crowd jumping with a kinetic rap performance featuring unique dance moves and the occasional prop from his comedic clips. In 2019, he headlined the Baby on Baby tour, crossing coast-to-coast and making appearances at the Texas JMBLYA fest as well as SXSW (where two years earlier he'd made a splash by walking around in a diaper). He was also booked for the 2019 Breakaway Festival in his hometown of Charlotte, North Carolina, returning for a victory lap alongside luminaries like Future and Boogie.

Jonathan Lyndale Kirk — better known as giddy rap sensation DaBaby — was born in Cleveland, but relocated to Charlotte when he was six. Through his older brothers, he absorbed the wordplay-filled music of Lil Wayne, 50 Cent, Nelly and Eminem. Bored with street life, he started rapping when he was 21. Originally performing as Baby Jesus, he started releasing music in 2015 with his NonFiction mixtape. After changing his name to DaBaby, he released God's Work: Resurrection, which featured a guest appearance from Boosie BadAzz and the attention-grabbing single "Light Show" (eventually adding a Yo Gotti guest verse to the remix). In 2017, DaBaby released a whopping six mixtapes, including the first four volumes of his Baby Talk series. His breakthrough came at the end of 2018 with the release of Blank Blank, a 10-track project supported by the humorous videos for "Next Song" and "Walker Texas Ranger." In 2019, he signed to Interscope Records, who released his official debut, Baby on Baby, which features appearances by Offset, Rich Homie Quan, Rich the Kid and more. Lead single "Suge" became his first charting hit on the Hot 100.