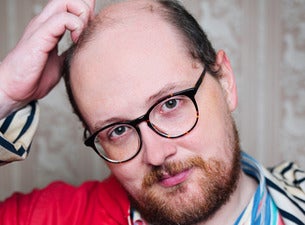 Indie electronica whiz Dan Deacon has been an emblem of sonic experimentation and no-holds-barred live performances for the past decade. The circuit-bending, beat-mangling, day-glo-loving underground hero’s frenetic live shows are among the most legendary affairs in DIY electronic music. Extensive audience participation, costumed dance contests, and chopped and screwed sounds straight out of a broken arcade game are just a few of the reasons Deacon remains the reigning king of off-the-wall, wtf-worthy concert experiences. Fans of futuristic sounds and blissed-out live performances won’t want to miss him as he continues to unleash electronic music’s wildest, wackiest dance party on tour.

Long Island, NY-born Dan Deacon played in a ska band in high school before going on to study music at State University of New York in Purchase. While in college he played tuba and guitar in various bands while also performing solo material and releasing his first two albums Mettle Mice and Silly Hat vs Egale Hat (2003). He went on to study electroacoustic and computer music in graduate school while continuing to steadily release DIY albums. Deacon scored a breakthrough in 2007 with Spiderman of the Rings, his first commercially distributed album and a critical hit that landed on numerous year-end lists. He followed up in 2009 with Bromst, another critical success that Pitchfork named one of the year’s best albums. Since then Deacon has continued to release solo material and tour extensively while also composing pieces for an impressive variety of performers, ensembles, and film directors including So Percussion and Francis Ford Coppola.