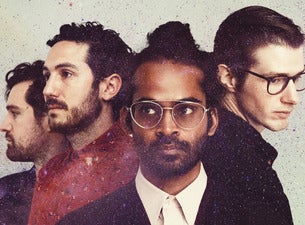 Darlingside meld soothing harmonies and strings with touches of 1960s hippie idealism, weepy nostalgia, and even a bit of sci-fi theory. It all makes for stunning, intimate indie-folk that is influenced by classic bands like Crosby, Stills & Nash and The Byrds, as well as modern contemporaries like Fleet Foxes and Mumford & Sons.

The Boston-based band formed in 2009 while its five members attended Williams College in Williamstown, Massachusetts. In a songwriting class, they found the inspiration for their name, a spin on British writer Sir Arthur Quiller-Couch's famous saying "kill your darlings" (so, think of Darlingside like "homicide").

As Darlingside, the quintet released their first self-produced EP — titled ‘EP 1' — in 2010, and soon set off on their first major tour. Just two years later, they dropped their debut full-length album, ‘Pilot Machines,' a set of gorgeously lush acoustic rock. Following the album's release, drummer Sam Kapala left the band — but that didn't deter them.

As a quartet, Darlingside took advantage of their drummerless lineup, highlighting their exquisite harmonies by performing around a single microphone. Heading back on the road, they rearranged their songs to fit this new format, and eventually signed with Nashville label Thirty Tigers. They then set to work on their second album, the pensive folk-pop beauty ‘Birds Say,' which would release in the fall of 2015.

In support of ‘Birds Say,' the group toured the U.S. alongside Grammy Award-winning singer-songwriter Patty Griffin. Following that, the band was named Artist of the Year in 2016 by the prestigious Folk Alliance International; it's a title they'd continue to fulfill with the October release of their acclaimed second EP, ‘Whippoorwill.'

The band's audience has since grown exponentially, especially with their third album, ‘Extralife.' The politically charged release came out in early 2018 and peaked at No. 9 on both the U.S. Top Heatseekers Albums list and the U.K. Independent Album Breakers chart. A large tour around the U.S. and Germany would follow. This included a slot on the Cayamo Cruise 2019, a musical nautical journey from Tampa, Florida, to Costa Maya, Mexico — also featuring artists like Jason Isbell and the 400 Unit, Emmylou Harris, and Dawes.