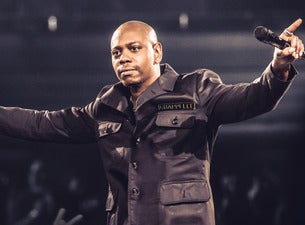 Dave Chappelle, mastermind behind sketch comedy goldmine Chappelle's Show, made a triumphant return to stand-up comedy in 2013. While he's beloved for his famous impersonations of Rick James and Prince, Chappelle doesn't rely on old material for his stand-up act, treating fans to an all-original show featuring extensive improvisation as he interacts with audiences. At his 2013 performances on The Oddball Comedy & Curiosity Festival, which he co-headlined with Flight of the Conchords, Chappelle had fans rolling on the floor, building anticipation for his highly coveted 2014 tour dates.

Born David Khari Webber Chappelle in Washington, D.C., Dave Chappelle studied theatre arts in high school before moving to New York City to pursue standup comedy. Despite getting booed off stage at the Apollo Theater's infamous "Amateur Night," he remained resilient, going on to make a name for himself on the New York comedy circuit. Following several successful film appearances in the '90s, including a starring role in 1998 cult classic Half Baked, Chappelle debuted his namesake sketch comedy show on Comedy Central in 2003, finding both critical and commercial success. In 2006 he released Dave Chappelle's Block Party, a concert film set in Brooklyn featuring performances by Kanye West, The Roots, and a temporarily-reunited Fugees.

"Funniest live performance I've witnessed to date. You will be quoting Chappelle after the show. I was laughing so hard that it started to hurt. Great show from start to finish."

"Dave...he is a comedic genius and one of the best ever. He was amazing and  I wished I could have gotten in line and gone to the second show!"

"He was hilarious. Talked about some of his history and was not afraid to get the audience involved. I had a great time."