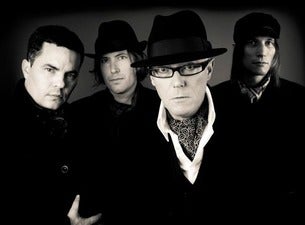 When he first emerged into the public eye as the bassist for pioneering British goth rock band Bauhaus in the early '80s, David J established a persona that was the very archetype of goth cool — often clad in black, maintaining a stoic presence in performance, the details of his pale countenance hidden behind a pair of dark glasses as he conjured an air of mystery.

After he went from cult status to pop stardom later in the '80s as a member of Bauhaus offshoot Love and Rockets via their 1989 smash "So Alive," J still maintained that elusive image, tapping into a rich vein of rock 'n' roll attitude that could be traced all the way back to the rebels of the rockabilly era.

In later years, whether he was participating in Bauhaus reunion concerts in the 2000s or joining former Bauhaus singer Peter Murphy for a 2018 tour performing the classic Bauhaus album 'In the Flat Field' in its entirety, J has remained a cool OG of goth.

As a founding member of trailblazing British goth band Bauhaus, David J (born David John Haskins in Northampton, England) has a firm place in rock history. He was the bassist for the band from their formation in 1979 to their demise in 1983, helping to place classic tunes like "Bela Lugosi's Dead" into the alternative rock canon.

After Bauhaus' breakup, J began a long, distinguished solo career with the 1983 album 'Etiquette of Violence.' But while he never abandoned his solo work for long, J joined his former Bauhaus bandmates Daniel Ash and brother Kevin Haskins in Love and Rockets in 1985.

That band took a while to reach its peak, which came in 1989 with their No. 3 U.S. hit single "So Alive." Love and Rockets split after their seventh album, 1998's 'Lift.' And while multi-instrumentalist J has played with and produced a broad array of artists since then (in addition to his continuing solo work), he probably gained the most attention when he joined his old bandmates for a series of Bauhaus reunion shows in the 2000s, later reconvening with Bauhaus frontman Peter Murphy for a 2018 tour where they performed the band's classic album 'In the Flat Field' in its entirety.