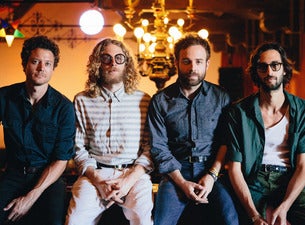 Folk-rockers Dawes have picked up the mantle laid down by elite rock and roll storytellers like Bob Dylan and Neil Young. Frontman Taylor Goldsmith forges his own legend with his powerful vocals, poetic lyrics, and passionate songwriting. The rest of the band fleshes out his masterpieces, starting with the propulsive drumming and falsetto backing vocals of brother Griffin Goldsmith. Tay Strathairn throws in elegiac keyboard flourishes, while bassist Wylie Gerber drops in smooth melodies on the low end. Ticket buyers will love the nods to classic rock, country, and folk, even as Dawes brings their own contemporary flare to stages across North America.

The roots of Los Angeles folk-rockers Dawes lie in the post-punk band Simon Dawes, the high school project of vocalists/guitarists Taylor Goldsmith and Blake Mills. The group grew to include Wylie Gelber on bass and Taylor’s brother Griffin on drums, though Mills left shortly after their 2006 debut Carnivore. As the sole voice and songwriter in the band, Goldsmith regrouped and added keyboardist Alex Casnoff. Rechristened as Dawes, the group began to explore a more folk-oriented sound with their 2009 debut North Hills, which was praised by critics for its unique and refreshing blend of familiar folk elements. The band made their national television debut on The Late Late Show with Craig Ferguson the following year before kicking off a co-headlining tour with Blitzen Trapper. Before the release of their 2013 album Stories Don’t End, Tay Strathairn replaced Casnoff on keys and added an even more dynamic sound to the group’s roster. In 2015 Dawes issued their fourth album All Your Favorite Bands, an acclaimed release that has cemented Dawes as a group to watch for both their stellar recorded output and their passionate live performances.