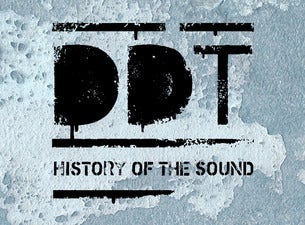 Dissident rockers Yuri Shevchuk and DDT, possibly the most famous Russian band ever, have persisted through what many might consider to be entire lifetimes. As a sort of Soviet Springsteen, Shevchuk knew the relative freedom of glasnost and perestroika. He also has struggled against Russia's current backslide into repression as an outspoken critic of President Vladimir Putin.

Shevchuk, a former art teacher, is the only remaining original member of DDT, which was founded in the city of Ufa in 1980. The band got its first recognition from both fans and authorities for "Ne Strelyai!" (Don't Shoot!), a thinly veiled condemnation of the USSR's occupation of Afghanistan.

With the KGB now aware of them, the band hitchhiked from city to city, performing secret concerts in a secret circuit of apartments, bomb shelters, and classrooms. Their music was banned, which only made them more popular. DDT became underground stars, tolerated but still under surveillance, with politically charged lyrics and a primal onstage style.

Things continued to change in Russia. DDT's popularity peaked in 1992 with the release of the radio-friendly Aktrisa Vesna (Actress of Spring). In 1994, DDT was named Rock Band of the Year and played for more than 120,000 fans at a free concert in St. Petersburg.

Critics have compared DDT to the Rolling Stones and Shevchuk to a Russian Bob Dylan for his constantly evolving style and gravelly voice. Shevchuk often punctuates DDT sets with poetry readings, and audiences sing along to his humorous lyrics about Russian life and his denunciations of injustice and corruption.

No fan of corporate rock, Shevchuk eschews commercial concerts in favor of benefits for community organizations. "Rock music is freedom," he has said. "Internal freedom."