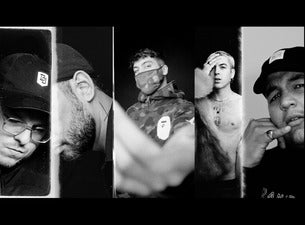 Bubbling just beneath the mainstream, Montreal's left-of-center rap crew Dead Obies have developed a cult following and a reputation for killer live shows. At these shows, their fans can be heard shouting every word of their French/English mash-up lyrics.

The five-piece experimental hip-hop band has crushed stages at practically every major festival in Quebec — including 2015's M for Montreal, 2016's Osheaga Festival, and FrancoFolies de Montréal in both 2013 and 2016. They even opened for Kendrick Lamar at 2017's Quebec City Summer Festival.

In early 2019, the group will celebrate their forthcoming third album with Le DEAD. tour, kicking off in Chicoutimi, Quebec in February and closing out at home in Montreal in April.

Formed in 2011 in the south suburbs of Montreal, Dead Obies aren't your average hip-hop collective. For one, the five-man crew — MCs Joe Rocca, 20some, Snail Kid, and Ogee Rodman, plus in-house producer VNCE CARTER — raps in a hybrid language sometimes called "franglais." It swerves between English, French, and the working-class Quebecois dialect known as "joual" (once a symbol of identity just for working-class Quebecois, joual now finds its way into music, media, and common parlance).

The Dead Obies often change it up mid-phrase. The group refers to their experimental style as "post-rap," and their two albums and two mixtapes offer dreamy, distorted takes on underground rap and traditional trap fare — though the 808s knock just as hard.

Dead Obies' singular style has brought them to the forefront of Montreal's rap scene; both their first and second albums (2013's ‘Montréal $ud' and 2016's ‘Gesamtkunstwerk') were long-listed for Canada's Polaris Music Prize. The former received a nomination at 2014's L'Autre Gala de l'ADISQ — the French Canadian equivalent of the Grammys — for Hip-Hop Album of the Year as well as Critics' Choice Album of the Year.