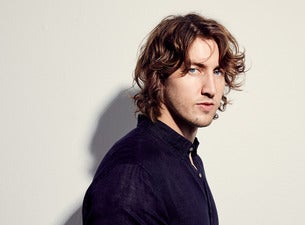 Sydney-born Dean Lewis lets his emotionally rich songs take center stage at his live shows, which have quickly become known for the way the singer-songwriter fosters bonds between himself and his fans. Switching between acoustic guitar and piano while explaining the origins of each song in his discography, Lewis presents everything simply and elegantly, allowing the audience to revel in each poignant line and smooth chord progression.

In 2005, Dean Lewis watched an Oasis DVD that changed his life. The cool-Brittania vibe and soaring songs of Liam and Noel Gallagher threw him into a deep study of the Britpop legends' music. That education — plus guitar lessons — resulted in his becoming adept in writing emotional, affecting music that embraces beauty while chronicling pain. After years of working on his music privately, Lewis released his first single, "Waves," in 2016. The passionate, fingerpicked track became a massive hit in his home country of Australia, eventually gaining platinum certification and garnering five nominations from the Australian Recording Industry Association Music Awards, including Best Pop Release and Song of the Year.

In May 2017, Lewis released his first EP, Same Kind of Different. That six-song set, which included the stirring "Need You Now" and the crashing "Lose My Mind" in addition to "Waves," was complemented later that year by an acoustic EP that included stripped-down versions of each track. 2017 was also Lewis' breakthrough year for live performances in Australia.

In 2018, listeners around the world grew to know and love Lewis thanks to the breakup ballad "Be Alright," which topped the Australia charts and hit the Top 10 in countries like Ireland and New Zealand. That same year he made appearances at festivals like Splendour in the Grass and BottleRock and released his debut album, A Place We Knew, which went double-platinum in Australia. His success continued into 2019, when he kicked off the concert series associated with the Australian Open, played festivals like Lollapalooza and South By Southwest, and toured the world. He also looked back at his early years, releasing an EP full of "Waves" reworkings that included a remix by Timbaland and a live Los Angeles performance.