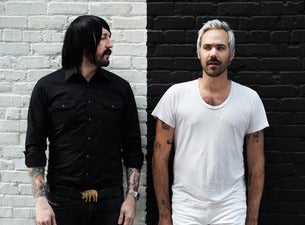 Boletos para Death From Above

Acerca de Death From Above

Canadian dance punk duo Death from Above 1979 amassed a cult following in the early '00s with their critically-praised recordings and monolithic live shows, and a 2016 live EP recorded at Jack White's Third Man Records in Nashville proves they remain a force to be reckoned with in concert. The pair's uptempo songs pack a serious punch, and audiences can't help but feel the power of Jesse F. Keeler's fuzz-laden basslines on standouts like "Romantic Rights," "Blood on Our Hands," and "Trainwreck 1979." Drummer/singer Sebastian Grainger keeps the energy on 10, kicking the tempo into overdrive and delivering his heartbreak lyrics with his fiery vocals. As the pair dive-bombs fans with an unrelenting barrage of supercharged riffs and heart-pounding beats, ticket buyers are more than happy to join in on the distortion-heavy dance party.

Though the details of their formation remain murky (they've circulated tongue-in-cheek rumors that they meet in prison, on a pirate ship, or at a gay bar), it’s clear that Sebastian Grainger (drums/vocals) and Jesse F. Keeler (bass/synths/backing vocals) first rocked Toronto clubs together in 2001. Death from Above 1979 developed a devoted following with their thunderous hometown shows before finding critical acclaim with their 2004 debut album You're a Woman, I'm a Machine. More notoriety followed when the group performed the song "Romantic Rights" on Late Night with Conan O'Brien the following year. Despite their rising profile and critical success, the band split in 2006 due to creative differences and undertook new projects – Grainger pursued a  solo career while Keeler went on to form electronica duo MSTRFKRFT. Fortunately for fans the breakup only lasted five years –  Death from Above 1979 reunited in 2011 and dusted off the cobwebs with a string of low-profile shows. The 2014 release of their sophomore album The Physical World marked the band's return to fighting form, and they embarked on an extensive, well-received tour to bring their massive riffs to back to audiences. As fans await more hard-hitting tracks from the group, they can witness Death from Above 1979 bring down the house at venues around the world.