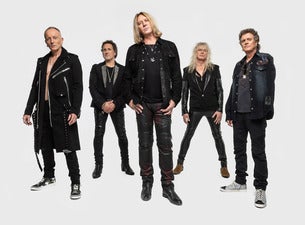 The world is a confusing place, but there's one resounding truth we can all count on: Def Leppard will rock you. Going strong for more than four decades, the British heavy-metal heavyweights are the world's premier torchbearers of the hard-partying, fist-pumping, ear-splitting hard-rock tradition.

With more than 100 million albums sold, dozens of arena-filling world tours under their spiked belts, and an upcoming induction into the Rock and Roll Hall of Fame, Def Leppard is headbanging as hard as ever — and once again launching themselves into a globe-spanning concert tour.

Def Leppard's longevity is all the more surprising given their debaucherous origins. The band's longest-standing members — singer Joe Elliott, bassist Rick Savage, and drummer Rick Allen — met as teenage secondary-school students in Sheffield, England. They soon found themselves swept up in the late-1970s wave of British metal that included Iron Maiden and Motorhead.

Year after year, No. 1 album after No. 1 album, they've survived all manner of rockstar antics over the course of their career through luck, fortitude, and good choices. When Allen lost his left arm after crashing his Corvette in 1984, the band never considered replacing him. After joining the band during the recording of 1982's Pyromania, guitarist Phil Collen quit booze, went vegetarian, and began studying martial arts. Today, at 61 years old, he gives a new definition to the term "dad bod" (dude is ripped). The final puzzle piece, Vivian Campbell, signed on after the 1994 death of original guitarist Steve Clark. This current lineup has endured together for a quarter of a century, longer than the entire lifespan of lesser bands.

As seen throughout 2018's 30th-anniversary tour, the members of Def Leppard remain in peak form and the band is a live-performance powerhouse. Summer of 2019 sees them embarking on a tour through Canada, England, and Northern Europe. If you ever needed affirmation about the life-preserving properties of rock 'n' roll, this is it.

The world's most iconic and celebrated rock legends hit the road in the summer of 2020 for a coheadlining tour so massive that it could only be held in America's biggest stadiums. The Stadium Tour featuring Def Leppard, Mötley Crüe, with Poison and Joan Jett & The Blackhearts hit select cities in the U.S. where each band brings their electrifying stage shows while promising to perform their stadium sized anthems.

2019 Rock & Roll Hall of Fame inductees Def Leppard are one of the most important forces in rock music. In 2019, the icons closed out a sold-out worldwide tour including a North American stadium run & headlining the UK's Download Festival to 90k screaming fans. Def Leppard's star continues to rise and prevail. The band have amassed a staggering 2.5 billion streams since releasing their music digitally in 2018. Def Leppard's influential career crosses generations and includes numerous hit singles and ground-breaking multi-platinum albums—including two of the best-selling albums of all time, Pyromania and Hysteria, both of which are certified Diamond (10x platinum).