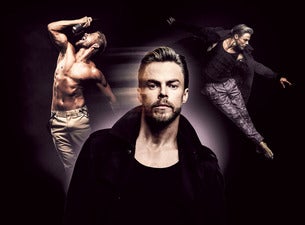 "Footloose" only begins to describe the ballroom, tap, salsa, and hip-hop dance skills on display when Derek Hough takes to the stage for Live! The Tour, the Emmy Award–winning dancer's first solo excursion.

In addition to dazzling audiences with his muscular and charismatic movements, the multitalented six-time Dancing With the Stars winner will sing a handful of songs — ranging from "Singin' in the Rain" to a medley of tunes from A Star Is Born — and display even more musical chops on drums and guitar.

Marking a first for this type of dance concert, and adding an entirely new dimension to the experience, Hough and his seven-member dance troupe — which includes champion ballroom dancer Daniella Karagach, World of Dance finalist Charity Anderson, and So You Think You Can Dance favorite Jay Jay Dixonbey — will be accompanied by a live band. Choreographers Tabitha and Napoleon D'umo — the brilliant creative team behind Hough's three "Move Live on Tour" outings with his sister Julianne — choreographed this new show.

Born into a family of competitive ballroom dancers outside Salt Lake City (his parents met on their college team), Derek Hough (pronounced "huff") trained in London and starred as Ren in the 2006 original version of Footloose: The Musical in the West End. He became a regular on the ABC dance-competition series Dancing With the Stars the following year.

In addition to his six victories on the show, he has won two Primetime Emmy Awards (with nine nominations) for Outstanding Choreography. After playing Corny Collins in NBC's production of Hairspray Live! in 2016, Hough ascended to the judges' table on the same network's competitive-dance rejoinder, World of Dance. Hough also became a best-selling author when his first book, Taking the Lead: Lessons From a Life in Motion, hit the New York Times' best-sellers list in 2014.