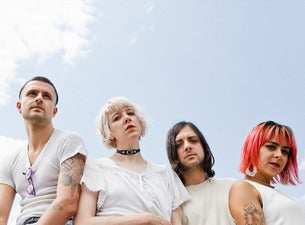 Canadian noise punkers Dilly Dally revive ‘90s alternative and grunge with their rebellious attitude and fuzzy guitar tones. Lead singer Katie Monks shreds her vocals chords in concert, delivering cryptic and harrowing lyrics while also blasting out power chords on her overdriven guitar. Meanwhile, lead guitarist Liz Ball slices through the mix with feedback-drenched licks and chainsaw riffs. The rhythm section brings each charging, minimalist rhythm to life with explosive aggression, especially on standout numbers like “Candy Mountain”, “Desire”, and “Purple Rage”. Ticket buyers looking to rock out to some good old fashioned ‘90s grunge or relive their teenage angst to the pummeling of a cathartic backbeat should be sure to catch Dilly Dally wherever they take their passionate and hard-hitting sound on tour.

Katie Monks and Liz Ball have been making music in the Toronto area ever since meeting in high school. They assembled Dilly Dally in 2009, taking cues from their musical idols The Pixies and Nirvana to forge their grunge-inspired sound. After years of local gigging the hard-hitting Canadian quartet drew the attention of area punk producers Josh Korody and Leon Taheny. The production duo helped them cut the singles “Next Gold” and “Candy Mountain” in 2014, which both generated serious buzz thanks to their raw sound and aggressive vocals. Partisan Records quickly signed the group for their debut album Sore, which floored fans and critics alike upon its 2015 release. As the record continues to make ripples in the underground scene, more and more fans are flocking to experience the authentic grunge experience of Dilly Dally’s live concerts.