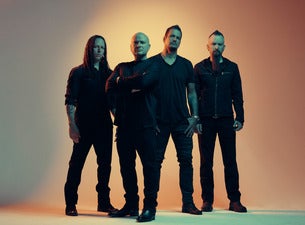 From movie trailers to massive arena concerts, David Draiman's gravelly howls and Dan Donegan's searing guitar riffs are pretty much an essential part of American hard rock's DNA. Forming in Chicago in 1994 as Brawl, the band became Disturbed after singer Draiman joined in ‘96. After cutting a few demos, the band signed with Giant Records for their 2000 debut ‘The Sickness,' an aggressive, guitar-laden rock masterpiece that all but sealed the Midwestern band's fate. With tracks like "Down with the Sickness" and "The Game," the album reached No. 29 on the Billboard 200 and saw Disturbed set off on tour with Marilyn Manson. The band moved to Reprise Records for 2002's hard-hitting ‘Believe,' which debuted at No. 1 on Billboard and started an almost unprecedented string of No. 1 debuts for the band (their streak was five in a row).

Dedicated to Pantera's Dimebag Darrell, who was murdered the year before, 2005's ‘Ten Thousand Fists' was a solid follow-up for the band that contained a number of fiery, charting singles, including "Stricken," which reached No. 2 on Mainstream Rock Tracks. Loudwire called it the best rock album of 2005. Then 2010's ‘Asylum' became the band's fourth consecutive studio album to debut at No. 1, something previously achieved only by Metallica and Dave Matthews Band. In addition to that record, almost all of their albums have gone platinum. For their 2015 album, ‘Immortalized,' the band changed it up a bit with a devastatingly intense cover of Simon and Garfunkel's "The Sound of Silence"; their performance of the song on Conan racked up over 84 million views. Some call them heavy metal, some hard rock, some have called them nu metal, but Disturbed doesn't care, proudly listing influences among "Sabbath, Maiden, Priest, Metallica, Pantera."

In support of their seventh studio album, Disturbed is on the Evolution World Tour. Three Days Grace will be playing with them during the North American tour dates.