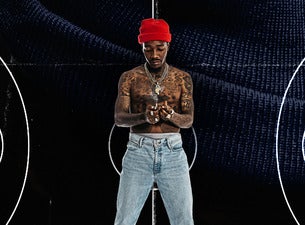 Dizzy Wright is a hot hip hop newcomer who’s taking over the mic with his hard flows and electrifying live tours. Whether he’s dropping sick beats and wailing sirens or spitting fast lyrics alongside his hype man, Dizzy Wright delivers a swagger-filled performance every time he takes the stage. He treats ticket buyers to fan favorites like “Can’t Trust ‘Em” and “Step Yo Game Up” and always delivers a memorable experience for concertgoers at his must-see shows.
BACKGROUND SNAPSHOT:

Dizzy Wright, born La’Reonte Wright, got his start rapping lyrics his mom would write for him when he was just eight years old. He began to take music more seriously when he entered the 2010 Sheikh Music Rip the Mic contest at age 20 and attracted attention from independent label Funk Volume. Before signing with the label, Wright released several free mixtapes that gave fans a taste of what was to come on his 2012 full-length debut SmokeOut Conversations – his first album on Funk Volume. The record peaked at No. 8 on the Heatseekers Albums chart and earned the young rapper a strong cult following in the underground hip hop scene. Since his debut he’s released two popular EPs – The Golden Age (2013) and BrILLiant Youth (2014) – collaborated with heavy hitters like Kid Ink and Wyclef Jean, and toured across the country.