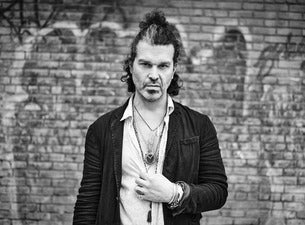 Doyle Bramhall II plays electric blues with a downhome feel that never fails to connect with audiences looking for a rocking time. In concert Bramhall channels greats like Jimi Hendrix, Albert King, and Stevie Ray Vaughan as he squeezes every last bluesy note out of his guitar. Whether he’s laying down originals like “Greenlight Girl” and “Soul Shaker” or tearing into standards like “Going Down” and “Outside Woman Blues”, he always impresses with his emotive playing, powerful vocals, and unique style. With top-notch touring musicians backing him up on stage, Bramhall treats blues lovers to an unforgettrable show full of ace musicianship and fiery fretwork every time he tours.

Named after his father -- a drummer for guitar greats Lightnin’ Hopkins and Freddie King -- Doyle Bramhall II was born to play the blues. He landed his first gig in 1984, touring with The Fabulous Thunderbirds at the tender age of 18. After performing in bands and working as a session musician in his native Texas, he recorded his self-titled debut in 1996. His next album, 1999’s Jellycream, earned him recognition from legends like Eric Clapton and Roger Waters. Before stepping in as lead guitarist on Roger Water’s In the Flesh tour, Bramhall recorded with Clapton and B.B. King on their 2000 collaboration Riding with the King. Since then Bramhall has performed with a veritable who’s who of popular musicians, including Elton John, Gregg Allman, Gary Clark, Jr., and Erykah Badu. Between his busy touring and recording schedules, Doyle Bramhall II still manages to thrill fans with his rocking originals and stunning renditions of blues classics in concert.