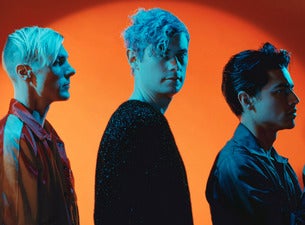 The three main elements defining Los Angeles trio DREAMERS are almost irreconcilable. First, DREAMERS' aesthetic embodies psychedelia. It hearkens back to simpler times on the internet, when pixilated 8-bit imagery of starry nights looked like HD. The group flaunts its self-made exploding rainbow gifs like a unicorn in heat. Second, contrary to what these psychedelic visions may musically imply, DREAMERS plays smart pop. The 12 tracks on the trio's debut LP This Album Does Not Exist sizzle and spark with three-minute tunes to perk you up and make you shake.Third, according to DREAMERS, there's a point to this. When DREAMERS—Nick Wold (vocals/guitar), Nelson (bass/vocals), and Jacob Wick (drums)—talk about This Album Does Not Exist, they assume a collective tone of considerate existentialism. They seek to counter the crassness of pop, the snobbery of jazz, and the pretention of indie that zaps the fun out of music with meaning. Yet, they want to draw you in, indiscriminate of taste, style, or ideology."Nothing exists by itself," muses Wold. "Everything in your mind is created in your mind and you see the world through that lens. Everything has a subjective reality in addition to an objective one, especially with music and art. So on this record, we're toying with that idea of existence and nonexistence." Yet, these songs of playfulness come from a place of less—homelessness, joblessness, borderline hopelessness. In 2014, Wold simultaneously vacated a relationship and an apartment and began living in his Brooklyn practice space. The brick warehouse used to be a brewery, he recalls, with rats as ubiquitous as the graffiti crawling the walls. "It was just a cinderblock room with no windows, no bathrooms, " begins Wold before Nelson chimes in, "Musical prison!" Recalls Wold, "I showered with this $20 a month gym membership I had." When he returned to the studio, "I just tried to make it look like I was coming in for a night session."During the two years of living in this "musical prison," Wold reduced his bartending gig to just once per week. It freed up his schedule to write more than 100 songs, many of which ended up on This Album Does Not Exist.Meanwhile, both Nelson and Wick bottomed out on the musician lifestyle and returned to office jobs in New York and Los Angeles, respectively. As Nelson says, "We found ourselves in ‘normal' situations and quickly decided to yank ourselves out of it."So now, after bouts of vagrancy, nomadism, and vigilant attempts at normalcy, DREAMERS is now committed to its collective vision of artistry, inclusion, and idealism. "The role of the artist in society is to be the dreamer, the one who thinks ahead," considers Wold.

"We're trying to pull people in. It's a way of trying to coax people into our world, continues Nelson. "We want to bring people in to listen to our music and enjoy themselves....and then hopefully it'll lead to a deeper connection."That's the dreamer MO, after all—to find the joy in living and to chase it. ----The L.A.-via-Brooklyn trio DREAMERS, are set to release new single, "Screws," a sensually charged track driven by pounding drumbeats and lyrics that perfectly channel the frenzy of the mental and physical unraveling of a relationship. The song, to be released Friday, May 25, will also be featured on the band's upcoming EP due early summer. The single coincides with the announcement of the band's 31 city U.S. headlining tour kicking off on September 13 in San Diego, CA, and features support acts Weathers, label-mate morgxn, and Rad Horror on select dates."Screws" is the first follow up to DREAMERS' debut album, This Album Does Not Exist, which debuted in 2016 and spun off three singles that charted at the top of the Billboard Alternative chart, including the top 10 Alt radio hit, "Sweet Disaster.""Screws," says lead singer, Nick Wold, "is a tortured love song about losing your mind -- the lyric is I'm lying naked and my brain has lost its screws. We really wanted to make a passionate song in the style of early 90's industrial music, which often dealt with the darker sides of romance, while bringing it into the world of 2018 sonically. It came out of the crumbling of logic and reason that love can bring, twisted dreams and memories, ghosts and insurmountable walls that can be created in a mind left to its own devices. I had a strange feeling at the end my last relationship, that I was most lonely when I was with her."