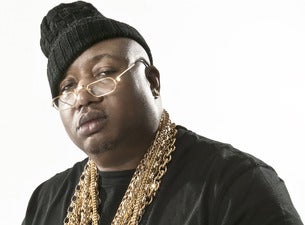 E-40 is one of the original innovators of Bay Area rap, helping the musical style gain a national following with his flamboyant raps and homegrown talent. His flourishing concerts have gained him a reputation for packing houses and filling up clubs with his irreverent attitude and off-the-hook style. He raps into his mic and waves his hands back and forth to get his audience reeling. His tours bring in crowds who love to dance, so if you have a ticket to an E-40 concert, make sure you’re ready to be on your feet all night. You can hear new tunes by this Bay Area rapper on his recently released album The Block Brochure: Welcome to the Soil Parts 4, 5 & 6.

Born in Vallejo, CA, E-40 began as an underground artist, but emerged into the mainstream Bay Area rap scene in the mid-90s. His solo album A Wider Way brought him national attention among rap fans, and by 1998, he was collaborating with other local rap artists. E-40's popularity officially took off in 2006 when he released "Tell Me When to Go," a single produced by Lil Jon. His album My Ghetto Report Card reached No. 3 on The Billboard Hot 200 that same year. E-40 is also well-known for his collaborations, particularly recording "Snap Yo Fingers" with Lil Jon and Sean P of YoungBloodz, which reached the Top 10 on Billboard's Hot 100. It’s hard to find artists who are as beloved around the country as they are in their hometowns, but E-40 has done a fantastic job of garnering love locally and nationally with his down and dirty jams.