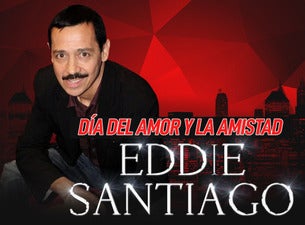 From the "King of the Romantic Salsa" to "The Erotic King", Puerto Rican superstar Eddie Santiago has earned himself a bevvy of well-deserved nicknames over the years with his unique brand of seductive salsa. In person, it's easy to see why -- Santiago is the master of "romantic salsa", which incorporates romanticized lyrics and seductive whispers into his infectiously catchy songs. Today, he keeps the style alive in concert by delivering zealous sets that feature tight percussion and his trademark passion-fueled lyricism. With a crisp voice that spans an impressively large range, Santiago delivers updated versions of his classic hits, including "Lluvia" and "Me Fallaste", just as flawlessly as ever. Ticket buyers can expect a rare live experience that focuses on traditional, no-frills dancehall salsa, keeping fans swaying all night long.

Heralded as one of salsa music's most influential living legends, Eddie Santiago has been making audiences swoon for more than 25 years. Born and raised in Puerto Rico, Santiago was part of several groups -- Generación 2000, Orquesta La Potente, Orquesta Opus Orchestra, and Saragüey -- before branching out on his own. His career as a solo artist took off in 1986 when he released his debut album, Atrevideo y Diferente. After earning a devoted fanbase with his unique style and tireless touring, Santiago made his his major label debut in 1999 with the album Celebracion: Epic Duets. The critically acclaimed record featured collaborations with other Latin music luminaries including Victor Manuelle and Elvis Crespo, and was named one of the 20 most outstanding records of 1999 by the National Foundation for Popular Culture. After a five-year hiatus Santiago returned to the spotlight in 2004 with Despues del Silencio, which was nominated for Best Salsa/Meringue Album at the 2006 Grammy Awards. WIth more than 15 studio albums under his belt, Santiago is a seasoned performer who continues to thrill fans with career-spanning sets on tour.