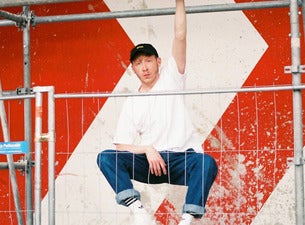 Few rappers have been as frank about their sexuality as Eddy de Pretto, an openly gay vocalist, songwriter, and actor born and raised in the Paris suburb of Créteil.

As the world's second largest market for rap and hip-hop, France has been a fertile source of personal hip-hop expression since MC Solaar released ‘Qui sème le vent récolte le tempo' (Who Sows the Wind Reaps the Tempo) in 1991. In 2018, de Pretto's debut album ‘Cure' topped France's album chart with softly cutting hip-hop poetry mixed with the breathy melodies of French chanson in the tradition of Barbara and Georges Brassens.

Eddy de Pretto's stripped-down performance style — a live drummer accentuates beats generated by an iPhone de Pretto clutches in his hand — connects him to his audience with an intimacy similar to his chanson predecessors.

Born in 1993 to a truck-driving father and a laboratory technician mother, de Pretto studied theater and music in Paris' "Advanced Institute of Dramatic Arts" and was soon acting in short films and features. The autobiographical title track of his 2017 EP, ‘Kid,' criticized the "abusive masculinity" of a dominating father's wish that his son be manly to a fault. The "Kid" video's more than 6 million views attest to the collective nerve it struck among its francophone listeners.

‘Cure' expanded the unflinching scope of ‘Kid,' adding songs about de Pretto's relationship with his drug dealer, anxiety about his sudden viral fame, and hometown ambivalence. Posing as tough in the video for "Normal" (viewed more than 10 million times), de Pretto demands that the world take him as he is. "I am completely normal," he says, "completely banal" — although normalcy seldom sounds quite so militant.

His poetic lyrics and quietly assured delivery led to de Pretto's nomination as "Best Newcomer Stage Act" at the Victoires de la Musique (France's Grammy Awards equivalent) in 2018. As he told one interviewer: "It's great that in the urban section of [French retail chain] FNAC, people who would ordinarily only listen to rap can discover new sounds with a more lyrical, emotional, and intimate approach."