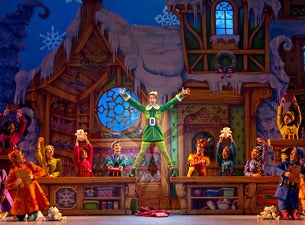 Elf: The Musical On Tour

Since its release in 2003, Elf has risen to the rank of a modern Christmas-movie classic. The film tells the story of Buddy, a North Pole toy-maker who slowly comes to the realization that he's not like the other elves (his 6'3" height being but the first tip-off). Soon he sets off to New York City in search of his real father, leaving a trail of trashed-up department stores, snowball-fight victims, and syrup-soaked spaghetti in his wake. Will Ferrell's hilarious yet heartfelt portrayal of Buddy has transformed the character into a Christmas icon on par with Santa, Rudolph, and Frosty, and the legend of Elf only grows each holiday season, as new generations discover it.

While a much-rumored sequel has yet to materialize, Buddy's tale has found another home on the stage. In November 2010, the musical adaptation of Elf debuted on Broadway, with an original score by the Tony Award-nominated team of composer Matthew Sklar and lyricist Chad Beguelin, and a book by Tony Award winners Thomas Meehan (The Producers) and Bob Martin (The Drowsy Chaperone) that takes some liberties with the film's plot. For one, the play is narrated by Santa Claus himself, rather than the Papa Elf character. But thanks to jaunty, wintry showtunes like "Christmastown" and "Sparklejollytwinklejingley," Elf: The Musical has become a phenomenon in its own right. After smashing box office records at the Al Hirschfeld Theatre on Broadway, the play has spawned a touring production, a soundtrack album, and an animated TV-special offshoot on NBC (2014's Elf: Buddy's Musical Christmas). In 2018, the play hit the road again, venturing across the United States to ensure that seeing Elf on stage remains an annual holiday tradition on par with watching Elf on screen.