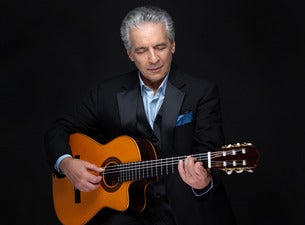 Guitar virtuoso and crooner Faramarz Aslani has been delighting audiences with his brooding vocals and classical acoustic style for nearly 40 years. He combines beautiful strumming and intricate finger picking with his smooth voice during his live performances of hits like "Days of Song and Sorrow" and "Rumi (The Beloved Is Here)". On his legendary tours Aslani treats ticket buyers to his timeless, beautiful collection of hits.

Born in Tehran, Iran, Faramarz Aslani grew up playing music and singing, but he never considered it as a full-time career. While pursuing a journalism degree at London University he performed music in his free time, and when a CBS producer discovered his hidden talents Aslani signed with the company. The soon-to-be-famous classical guitar player released the song "Ageh Ye Rooz" in 1977, and it became a staple of Iranian music and culture in the '70s. A number of successful records followed over the next few decades, earning Aslani much critical acclaim and commercial success.He has been credited for popularizing his intriguing folk-pop style in Iran and has inspired a range of singers to cover his songs in their native languages. Aslani has performed for audiences worldwide, and his live shows prove to be as authentic and passionate as his recorded music.