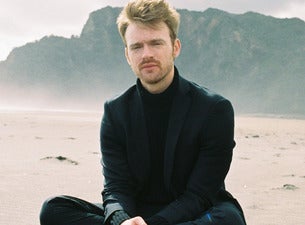 Music lovers likely first met Finneas via the songs he cowrote and coproduced for his little sister, Billie Eilish. But the man made it into plenty of homes before her rise with his roles in film and TV — particularly as Glee's Alistair — and that charm and professionalism shows during his concerts. He's been known to sport a three-piece suit on stage, and his onstage setup has often also been limited to three pieces: a mic, a guitar and a keyboard rig (which includes backing tracks for his darkly sparkling brand of electronic pop). Even so, Finneas (often stylized as FINNEAS) has no problem inspiring wild screams from his audiences, who come for some combination of his clean-cut handsomeness, velvety voice and diary-like lyrics about love and lust. After the Los Angeles native became a staple of Eilish's shows, he broke out solo to sold-out gigs on the coasts, festival spots galore and a headlining tour named after his debut EP, Blood Harmony.

Finneas Baird O'Connell started writing and producing music at the age of 12, and acting shortly thereafter, appearing in movies like the Cameron Diaz flick Bad Teacher and acclaimed indie film Life Inside Out (which starred his actress mother, Maggie Baird). By 2015, as he turned 18, O'Connell's career seemed to be tipping toward the screen: on the one hand he fronted a pop-punk outfit called The Slightlys who'd won several local band battles; on the other, he had a regular role in the final season of Glee. But then he wrote "Ocean Eyes" for his band and, at the last minute, decided it'd sound best sung by his 13-year-old sister. Billie Eilish became a viral sensation as a result, and Finneas' path was cemented. Over the next few years, he'd cowrite and coproduce the dark and inventive music that would make Billie a star while laying the groundwork for his solo sound — a brighter, soulful take on that minimal, electronic-assisted pop. While his many early singles were overshadowed by his work on her essential debut LP, 2019's When We All Fall Asleep, Where Do We Go?, Finneas climbed the charts along with Billie, sitting atop Billboard's Hot 100 Songwriters and Producers lists for nine weeks. That more than paved the way for the fall 2019 arrival of Finneas' proper debut, the Blood Harmony EP, named after the sound that siblings can achieve while singing together.