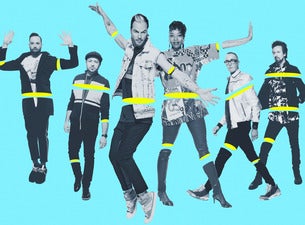 Boletos para Fitz and The Tantrums

Acerca de Fitz and The Tantrums

FITZ AND THE TANTRUMS IN CONCERT:

Retro indie-pop group Fitz and the Tantrums are keeping the Motown Sound alive and well with their modern take on classic soul and funk. Combining call-and-response vocals,  backbeat tambourines, and vintage-inspired instrumentation, the band's electric live shows are equal parts shimmy and shake, inspiring nonstop dance parties as fans sing along to infectious pop masterpieces like "MoneyGrabber" and "Out of My League." Riding high on the success of their sophomore album More than Just a Dream, Fitz and the Tantrums are set to treat fans to another round of unforgettable shows on tour in 2014.

Michael Fitzpatrick formed LA-based Fitz and the Tantrums in 2008 after purchasing a Conn electronic organ -- an instrument that would prove vital in the development of the band's retro sound. The group performed their first show just one week after their first rehearsal, underscoring an effortless chemistry that was readily apparent on their 2009 debut EP Songs for a Breakup, Vol. 1. After touring with Maroon 5 and performing at SXSW, the band signed with Dangerbird Records for their 2010 debut LP Pickin' Up the Pieces. The album landed at No. 1 on the Billboard's Heatseekers Albums Chart, establishing the group as one of the most promising rising talents in indie-pop and paving the way for 2013 sophomore effort More than Just  a Dream — a Top 40 hit on the Billboard 200.

FITZ AND THE TANTRUMS IN CONCERT:

"Fitz And The Tantrums put on a great concert!!! The setlist was awesome and the crowd was singing and dancing with the band!!!"

"Loved this concert. They were so good -- all their music is so distinct. Excellent musicianship all the way around and TONS of energy."

The whole concert is so high energy, I was dancing the whole time with much of the crowd. They seem like genuine people as well - really appreciative of the fans."