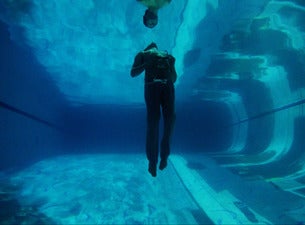 Boletos para Francis and the Lights

Acerca de Francis and the Lights

FRANCIS AND THE LIGHTS IN CONCERT:

Francis and the Lights is the brainchild of enigmatic performer Francis Farewell Starlite, a skilled songwriter with a voice like Peter Gabriel and a knack for elegant, understated pop gems. Starlite really shines at his live shows, combining stunning visuals and idiosyncratic dancing to create an all-out feast for the senses that owes as much to performance art as it does to legendary performers like James Brown and Prince. Fans looking for a truly unique concert experience have found their answer in Francis and the Lights.

Francis Farewell Starlite began performing as Francis and the Lights in 2007, shortly after he dropped out of Wesleyan University. His debut EP Striking and its 2008 follow-up A Modern Promise were popular with fans and critics alike, earning him a cult following and landing him on the road with none other than hip-hop superstar Drake, who hand-picked him for the Home Away From Home Tour.  He made his full-length debut in 2010 with It'll Be Better, a stellar collection of hushed, intricately arranged pop music. In addition to opening for MGMT, Ke$ha, and La Roux, in 2011 Starlite presented a performance art piece called The White Room at the Curtis R. Priem Experimental Media and Performing Arts Center. In 2013 he released his third EP Like A Dream to another round of critical acclaim, building anticipation among fans for a sophomore LP and accompanying tour.