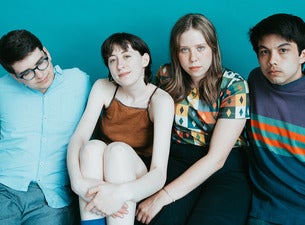 Hyper-prolific indie pop wunderkind Frankie Cosmos takes a DIY, lo-fi approach to her music that makes every song feel as intimate and snuggly-warm as a moth-eaten favorite sweater. Her songs are short and pared-down, often clocking in at less than two minutes and using sparse guitar and drums, but they pack a tuneful, emotional punch that’s bigger than the sum of their parts. At her live shows Cosmos exudes an alluring mix of innocence and confidence, delivering her playful songs with a child-like charm that draws fans in and gets them bouncing around to the sing-song melodies and elemental rhythms. With a drummer and a bassist backing her up, Cosmos strums her guitar and sings her heart out, remaining equally captivating on both softer numbers and high-energy romps. Her music is disarmingly personal–“Owen” is a love song to her brother and “Birthday” talks about the contradictions of getting older–but they’re also universal in their honesty, and fans have no trouble relating any time Cosmos takes the stage to sort through life’s eternal questions in her characteristically carefree manner.

New York City-born Frankie Cosmos, aka Greta Kline, is the daughter of acclaimed actors Kevin Kline and Phoebe Cates. Though she has dabbled in her parents’ profession and acted in several films, Kline developed a passion for music at an early age, taking up guitar, piano, and drums in her youth and penning her own songs as a teenager.  She began releasing her self-recorded music in 2011 under the moniker Ingrid Superstar, uploading more than a dozen albums to Bandcamp that same year. She made her debut as Frankie Cosmos in 2012 and maintained a similarly prolific release schedule, posting numerous albums to Bandcamp over the span of a few years. In 2014 she and her band made their debut on indie label Double Double Whammy with the album Zentropy, a critically acclaimed collection that earned rave reviews from outlets like Pitchfork and PopMatters. Cosmos followed up in 2015 with the EP Fit Me In, another warmly received effort that has fans eager to lose themselves to her infectiously happy-go-lucky tunes in concert.