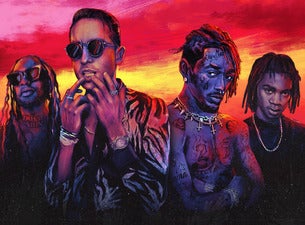 One of the hottest up-and-comers in the hip hop game, G-Eazy makes sure his packed live shows are wild nights that fans will love bragging about to their friends. The minute he steps on stage, the hip hop heartthrob radiates an effortlessly cool vibe and a refreshing sense of humility. His confidence, talent, and hit-filled catalog -- which has earned him comparisons to French Montana and T. Mills -- instantly captivate ticket buyers' hearts and ears. Slower songs like "Plastic Dreams" get kicked up a notch in concert, and G-Eazy and his backing band -- which typically includes a guitarist/programmer and a drummer -- always make sure the crowd is thoroughly amped. As he tears into a diverse setlist that includes party starters like "Loaded" and "Lotta That", G-Eazy never fails to take audiences along for a truly thrilling ride.

Rapper, singer, and producer G-Eazy, a.k.a. Gerald Earl Gillum, was born and raised in Oakland, CA. While studying music and business at Loyola University in New Orleans, he started producing singles and sharing them on his Myspace page, racking up hundreds of thousands of plays on early songs like "Candy Girl" and "Waspy". In 2007 he released his first mixtape, Sikkis On The Planet, which he promoted DIY-style by designing his own album art and selling tapes out of his backpack. Two years and dozens of Myspace songs later, he was nominated for an MTVU Award for Best Music on Campus and won the NAACP Best Music on Campus Woodie award. After earning a degree in Music Industry Studies in 2011, he scored an opening slot on Drake's tour and joined rapper Shwayze on a nationwide tour. He also released the mixtape Endless Summer, which included one of his biggest hits, an updated version of the 1961 No. 1 hit "Runaround Sue" by Dio Dimucci. He continued to make waves on the live circuit in 2012-13 with a co-headlining tour alongside Hoodie Allen, a string of dates on Warped Tour, and an opening slot on 2Chainz and Lil Wayne's America's Most Wanted tour. 2014 was G-Eazy's most eventful year to date: he signed a major label deal with RCA Records and released his debut album These Things Happened, which topped Billboard's R&B/Hip-Hop and Top Rap Albums Charts. Dubbed by MTV as one of their "artists to watch", G-Eazy hit the road at the end of 2014 with a North American tour, bringing his energetic performances to hoards of party-hungry fans.