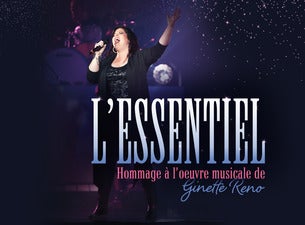 Canadian songstress Ginette Reno has been wowing audiences with her powerhouse vocals for over 50 years. Whether she's belting out hits from her prized discography or serenading fans in French and English, Reno mesmerizes concertgoers with her operatic prowess and captivating stage presence. Her performances are filled with passion and emotion, and ticket buyers can't help but be enamored at her moving shows.

Canadian singer Ginette Reno, born Ginette Raynault, got her start performing at Montreal cabarets in her teenage years. She earned her big break at just 18 when she won Female Discovery of the Year at a gala for Quebec musicians, launching her first tour throughout the US, UK, and France soon after. She released her self-titled debut album in 1962 to critical acclaim and commercial success,  becoming a superstar virtually overnight. Since then the gold and platinum-selling artist has released over 30 records, won three Juno Awards, earned a star on Canada's Walk of Fame, and awarded the honor of Officer of the Order of Canada. Whether she's singing alongside luminaries like Celine Dion and Lionel Richie or performing solo, the highly decorated Reno always delivers a jaw-dropping live show for her devoted fans.