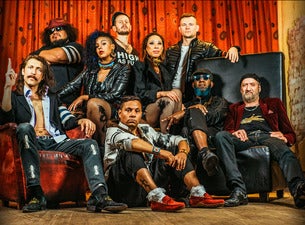 Nine-piece multi-cultural band, GOGOL BORDELLO will return to Australia for the first time since 2010 to play in Sydney and Melbourne. These shows will give audiences a first chance to hear new tracks from their seventh studio album Seekers and Finders, which Mojo Magazine calls an “air-punching, vodka-swilling anthem, custom-built for circle pits worldwide."

Tickets for all shows go on sale at 9am this Friday, December 8.

Formed in 1999 by frontman Eugene Hutz, Gogol Bordello took their style of Eastern European-influenced gypsy punk and doused it deep into the underground rock of New York City. In keeping with his vision of creating an international groove, he recruited musicians of all ages, nationalities and cultures to join the ever-evolving line-up.

The group’s supercharged music is based on a gypsy two-step rhythm and is augmented by styles picked up along the way including metal, rap, flamenco, roots reggae, Italian spaghetti, western twang and dub. Their music and legendary concert performances have earned the band a global following and critical praise.

Don’t miss this aural party of instruments including violins, accordions, trumpet, marimba amongst the standard rock basics of guitars, drum and bass. A live musical experience like no other, Gogol Bordell will break boundaries this March.

"... the ever-evolving collective has defied the boundaries of continents and genres in their quest for spiritual illumination through gypsy punk." - Consequence of Sound