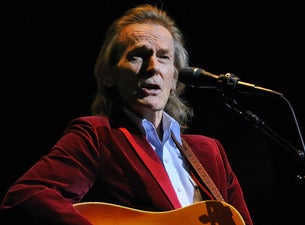 Legendary singer-songwriter and folk-pop pioneer Gordon Lightfoot helped define the sound of '60s folk with his rootsy voice and politically-minded songs. A half a century later, Lightfoot continues to be a beacon of authenticity, taking the stage with little more than a mic and his trusty twelve-string guitar to deliver no-frills renditions of laid-back, wide-eyed classics like "Sundown" and "Sit Down Young Stranger." Joined by a talented band of backing players for his upcoming tour, Lightfoot will lead fans on a golden-toned stroll down memory lane.

Ontario-born Gordon Lightfoot got an early start in music, performing in church choirs during his youth and making his first appearance at Toronto's historic Massey Hall at just age 12. After teaching himself folk guitar in high school, Lightfoot spent some time in Hollywood studying jazz and orchestration before moving back to Toronto in 1960 and cutting his teeth in the city's coffee house music scene. Regional early-'60s hits like "Remember Me (I'm the One)" and "Negotiations" helped build his reputation as a songwriter, and before long a variety of high-profile artists -- including Elvis Presley and Peter, Paul, and Mary -- were recording versions of his songs. His biggest success as a solo artist came in the '70s, when he topped Canadian charts with four albums and scored his first US No. 1 with 1974's "Sundown." With 19 studio albums and more than five decades' worth of touring under his belt, Lightfoot brings plenty of experience with him on the road as he sets out for another round of tour dates.

"Gordon was on fire. His voice was strong, and he was in a great mood."

"Great show ! Loved having the chance to hear all those wonderful hits sung with all the

feeling they were recorded with."

"Gordon Lightfoot was amazing! He played all the classics and many other gems. Mr. Lightfoot was witty, light-spirited, and very humble with his fans. The accompanying band was wonderful as well."