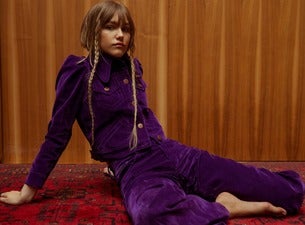 When Grace VanderWaal auditioned for America's Got Talent at the age of 12, Simon Cowell called her "the next Taylor Swift." That was in 2016, and all she had at the time was her voice and a ukulele. To be clear, that's all that this young woman from Suffern, New York, needs to hold an audience's attention — her raspy voice, sweet strumming and wise-beyond-her-years songs are a marvel to behold in person — but VanderWaal has only become more skillful and worldly since winning that show's 11th season. And she's taken her indie-folk-meets-artsy-pop act everywhere from the Macy's Thanksgiving Day Parade to the Special Olympics (duetting with Jason Mraz) to opening slots on tours by Imagine Dragons and Florence + the Machine. She's also added a band to her performances, which gives her bigger songs that extra oomph, but the highlight is seeing VanderWaal front and center, uke in hand, bouncing and cooing as she pours her heart out to the crowd.

On the night that Grace VanderWaal won America's Got Talent at the age of 12, Stevie Nicks gushed, "She reminds me a lot of me...we like to be a little different...not like anybody else." VanderWaal's individuality — that combination of an unbelievably high emotional intelligence and a quirky-but-not-cutesy approach to singing and songwriting — is the defining hallmark of her career and it goes back to her childhood. VanderWaal began singing her own made-up songs at three, and within a few years began searching for more grown-up subject matter, writing lyrics from the perspective of characters in movies she'd seen. She bought herself a ukulele at 11, taught herself to play by watching videos online, and soon began posting videos of her own. When she tried out for AGT, it was with an original song about shifting identity, "I Don't Know My Name." Afterward she'd be invited to play that composition on countless talk shows, not to mention record it for her major-label debut EP, 2016's Perfectly Imperfect. Her 2017 full-length, Just the Beginning, found VanderWaal incorporating more modern electronic pop production into her otherwise acoustically driven sound. That opened the door for exciting new sonic hybrids, like 2018's "Clearly" (a boldly neon reinterpretation of Johnny Nash's "I Can See Clearly Now") and the epic, "Hideaway," recorded for the animated film Wonder Park.