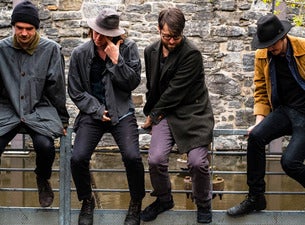 Half Moon Run on Tour

Since the release of their 2012 debut album, Dark Eyes, Montreal indie-rock quartet Half Moon Run have developed a reputation as one of Canada's most mesmerizing live bands. Not only does the group feature four equally versatile multi-instrumentalists — resulting in copious onstage role-swapping — each member is blessed with an angelic voice that contributes to their spine-tingling, church-worthy harmonies. Half Moon Run are the sort of singular band that possess the wiry intensity to rock a small club, the anthemic grandeur to captivate festival crowds and the sophisticated arrangements to enhance the soft-seater theater experience. And to properly recreate their signature songs in a live setting, the band employ two drum sets, ensuring that each show builds into a heart-racing, percussion-pounding spectacle.

Half Moon Run in Concert

Formed in Montreal in 2010, Half Moon Run quickly sprinted to the frontlines of that city's fabled indie-rock scene. On their arresting debut single, "Full Circle," the group effortlessly forged a sound that was both rustic and grandiose, incorporating the forest-squatting harmonies of Fleet Foxes, the emotional intensity of Bon Iver and the disquieting atmospherics of Radiohead into its widescreen expanse. That song would help propel their first record, 2012's Dark Days, to platinum status in Canada, and into the charts in several European countries. After touring with indie heavyweights like Mumford & Sons, Of Monsters and Men, and City and Colour, the group returned with 2015's Sun Leads Me On, which entered the Top 5 on the Canadian Billboard albums chart, earning them a Juno nomination for Breakthrough Group of the Year. (And thanks to anthemic singles like "Turn Your Love," the band also made significant inroads into the U.S., with the album cracking the Top 10 on Billboard Heatseekers chart.) But with their third album, A Blemish in the Great Light, Half Moon Run pivot away from their roots-rock foundation to bring their artier instincts to the fore.