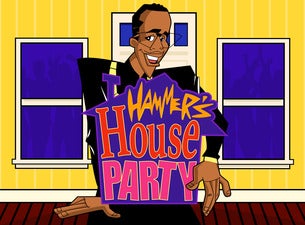 Every fan of 1990s hip-hop and R&B gets to see and hear their dreams come true when Hammer's House Party happens. It would be impressive enough if it were just MC Hammer on his own, bringing era-defining hits like "U Can't Touch This" and "2 Legit 2 Quit" to the stage and partying like it's 1991. But Hammer knows that nobody parties alone, so he's got plenty of his peers along for the festivities.

That means you get the slinky soul of En Vogue, the fun-filled tag-team rap of Kid 'n' Play, and the sweet pop-meets-R&B vibe of Color Me Badd. Then there's the raucous flow of Mr. "Baby Got Back" himself, Sir Mix-a-Lot. If you were there for all of these artists the first time around, it'll feel like a triumphant return to the glory days. If you weren't, it'll be like entering a secret realm that only exists for a couple of hours at a time.

Back in the early '90s, nobody dominated the pop and R&B worlds like MC Hammer. The man with the Hammer pants and the moves to match became a phenomenon when "U Can't Touch This" turned into one of the biggest blockbuster hits of 1990. Lots of trends have come and gone since then, but through the decades there have always been fans who want it to be "Hammer time" all the time.