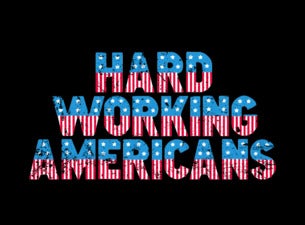 Nashville, TN – What do you get when you take a batch of incredible songs, five veteran players who have never played together, with an arsenal of five musical minds working in unison to reinvent them? You get Hard Working Americans. Hard Working Americans is the self-titled debut from this new musicians’ collective, scheduled for a January 21 release on Melvin Records/Thirty Tigers. Genres meld seamlessly with the birth of this group, featuring artists from the Americana, singer/songwriter, experimental, jam and rock communities. Hard Working Americans is: Todd Snider (vox), Dave Schools of Widespread Panic (bass), Neal Casal of The Chris Robinson Brotherhood (guitars/vox), Chad Staehly of Great American Taxi (keys) and Duane Trucks (Col. Bruce Hampton) and of the Trucks family lineage (drums). See how Hard Working Americans came to be in this short in-studio EPK: http://vimeo.com/74119257.

Hard Working Americans features 11 tracks written by a range of artists that include Randy Newman, Kevin Gordon, Hayes Carll, Kevn Kinney (Drivin’ ‘N Cryin’), Gillian Welch & David Rawlings, Brian Henneman (The Bottle Rockets), Will Kimbrough, Tommy Womack, Kieran Kane, Chuck Mead (BR5-49), Don Herron and Frankie Miller (Elizabeth Cook). As the five band members came together, they had no idea what to expect. Snider, known more as a songwriter than interpreter of songs, would just start singing and clapping, which then set the creative ideas in motion with his new band mates. This was uncharted territory as the players had not worked together previously, but it became an uninhibited, creative and fruitful environment as their chemistry was almost instant, a very pleasant surprise. In the end, the group created fresh and uniquely original arrangements of great songs, led by Snider’s intrepid vocals and backed by a band of virtuosos. The songs were then sequenced in an order that tells a story of the everyday person, the blue-collar worker, the frustrated, the struggling, the Hard Working American.