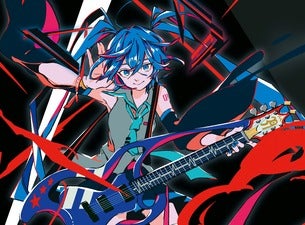 To say there's no performer like Hatsune Miku is an easy claim to back up. First of all, she has gravity-defying turquoise twintails that seem to dance to her futuristic pop all on their own. Secondly, she's 16 years old, always, and has the sweetly high-pitched voice to match. And thirdly, if the equipment budget existed to make it happen, Hatsune Miku could perform on every stage in the world at once. That's because she is, as the software company who developed her puts it, "a collaboratively constructed cyber celebrity." Though Miku began as (and still is) a so-called Vocaloid — a programmable, singing voice synthesizer — she was imagined by Crypton Future Media as "an android diva from the near future," and has since been reimagined by countless professional and amateur creators as a singing, dancing and more or less living pop idol. With the help of high-tech projectors and a special glass screen, she made her live debut at Japan's Animelo Summer Live anime music festival in 2009. Miku was a hit, and her high-energy show quickly outgrew the convention circuit. In 2014, she opened for Lady Gaga's ArtRave tour. By 2016, American bitpop band Anamanaguchi was opening for her (and joining forces for a reality-bending encore). The trilingual, holographic Miku has long sold out arenas in her native Japan, so international fame was inevitable.

Hatsune Miku was born August 31, 2007, released by Sapporo's Crypton Future Media as a Vocaloid that music producers could purchase and program into their own works. She's since "sung" on over 100,000 tracks including the original Nyan Cat jingle, Japanese hits by Supercell and Exit Tunes, and a Pharrell Williams remix of J-pop group Livetune. It all began when Crypton gave their Vocaloid an identity — a set of pipes sampled from voice actress Saki Fujita, and a look dreamt up by manga artist Kei Garō. It wasn't long before Miku came to life on Niconico, a YouTube–like hosting platform where users uploaded original Miku creations, and others would build on those by illustrating or animating the turquoise-haired idol. As Miku's underground popularity grew, so did her mainstream presence via partnerships with big names. She's since starred in rhythm games released by Sega, sung in an opera backed by Louis Vuitton, been on the cover of UK fashion and music magazine Clash, had her image launched into space by the Japanese equivalent of NASA (JAXA) and performed on the Late Show with David Letterman, to name just a few of her many accomplishments.