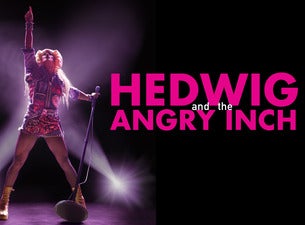 Brilliantly innovative, heartbreaking, and wickedly funny, HEDWIG AND THE ANGRY INCH is the landmark musical by John Cameron Mitchell and Stephen Trask that is “groundbreaking and ahead of its time” (Entertainment Weekly). This genre-bending, fourth-wall-smashing musical sensation, with a pulsing score and electrifying performances, tells the story of one of the most unique characters to ever hit the stage. It’s about finding your other half; it’s the story of the origin of love.

Directed by Tony Award winner Michael Mayer (Spring Awakening, American Idiot) and starring Tony and Olivier Award-nominee Euan Morton, HEDWIG AND THE ANGRY INCH is the winner of four 2014 Tony Awards including Best Musical Revival. It played to record-breaking sell-out crowds on Broadway and promises to take Chicago by storm with what Rolling Stone proclaims is “the best rock musical ever!”

May be inappropriate for children 12 and under. (Hedwig and the Angry Inch is recommended for mature audiences – for strong language and adult themes.)