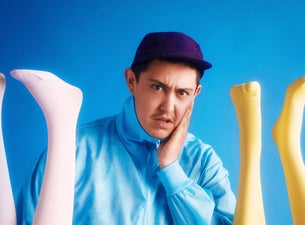 California-born Frank Lopes' pure and raw free-flowing style comes straight from the streets. At the age of 19, Lopes transformed into rapper Hobo Johnson after he became homeless and started creating music out of his 1994 Toyota Corolla. The aging car eventually became the titular subject and recording space for his 2015 debut project, ‘Hobo Johnsons 94 Corolla.' Around this time, he began studying music composition at Sacramento City College, but eventually dropped out to put his full focus on his music.

In the process of formulating what he calls "sadboi hip-hop," Lopes formed his band The Lovemakers and performed on the street and at open mics throughout Sacramento. In 2017, the band released their official studio debut, ‘The Rise of Hobo Johnson.' The album spotlights Lopes' spoken word theatrics—a blend of heartfelt slam poetry and confident, stream-of-consciousness raps about love, loneliness, and everyday philosophies—over heady, folky, minimalist hip-hop grooves. His style takes from rappers such as Kendrick Lamar and Chance the Rapper, along with some folk-punk influence from bands like the Front Bottoms, who he's both covered and toured alongside.

But it wasn't until he and The Lovemakers posted a lo-fi, single-shot video for their song "Peach Scone" that they gained attention well beyond the West Coast. Set in guitarist Derek Lynch's backyard, the video showcases Lopes' impromptu charm backed by the band's moody, makeshift rhythms. It quickly racked up millions of views after being posted to Facebook for NPR Music's 2018 Tiny Desk Contest. ‘The Rise of Hobo Johnson' soon hit No. 17 on Billboard's Heatseekers Album chart in March 2018. With this exposure, more videos filmed from Lynch's backyard have since pushed well past the million-view mark. The band then set off on their Bring Your Mom tour, bringing their rhythmic revelations to sold-out shows and festivals around North America and beyond.