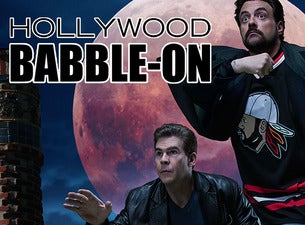 When famed independent film director Kevin Smith teams up with veteran radio personality Ralph Garman, you know the results are going to be hilarious. Their weekly Hollywood Babble-On podcast gives these two geeky, raunchy comedians a platform to rant about whatever crosses their minds, much to the amusement of their rowdy audience. Taking the show on the road to select American cities in 2015, this dynamic duo will have ticket buyers rolling in the aisles with the unpredictable shenanigans and audience participation that have made them a phenomenon on the World Wide Web. Be sure to catch familiar segments like Shout Out, Inappropriate Toys, and Creepy Clown Time from these comedic heavyweights on tour.

Kevin Smith (director and writer of cult-classics like Clerks, Dogma, and Mall Rats) first met voice actor and comedian Ralph Garman while the latter was working on The Kevin & Bean Show. Smith was so impressed by Garman’s wide-ranging repertoire of celebrity impersonations and daily program Showbiz Beat that he suggested they start a weekly podcast to discuss entertainment news and poke fun at B-list celebrities. The result was Hollywood Babble-On, a cult success right out of the gates that was even named one of iTunes Best Podcasts of 2010. As the show’s popularity grew the pair began to host the podcast at large-capacity theaters like the Jon Lovitz Comedy Club and eventually The Hollywood Improv. Hollywood Babble-On went on to win Stitcher awards in 2012 (Best Film & TV podcast) and 2013 (Best Entertainment + Pop Culture podcast), and has featured an impressive array guest comedians including Jon Lovitz, Adam Carolla, Bill Burr, Patton Oswalt, Jay Mohr, and David Koechner.