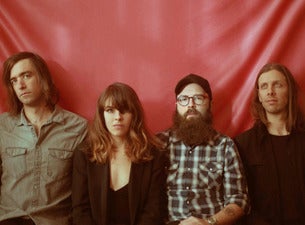 HOP ALONG IN CONCERT:

Indie rockers Hop Along  play a melodic brand of freak folk with a hard-hitting grunge edge. At the band's live shows lead singer Frances Quinlan is sure to win over fans with her stunning vocal prowess, switching from a soft and dulcet sigh one moment to a raspy wail the next—often in the same phrase. Her powerhouse vocals, haunting lyrics, and punchy power chords set an emotional mood, and ticket buyers can’t help but be moved by the heart-rending sentiments of her powerful songs. Lead guitarist Joe Reinhart sculpts dynamic sonic landscapes on show-stopping numbers like “The Knock”, “Powerful Man”, and “Texas Funeral”, alternating between folksy fingerpicking and distortion-drenched soloing. Throw in driving drums, melodic basslines, and country-tinged harmonies and you've got a grunge folk sound that fully immerses audiences every time the band takes the stage.

After playing music with her older brother for years, Philadelphia-native Frances Quinlan independently released the freak-folk album Freshman Year in 2005 as a solo artist under the cryptic moniker Hop Along, Queen Ansleis. The recording project grew into a duo when her other brother—drummer Mark Quinlan—joined in 2008, and the two began playing shows under the abbreviated name Hop Along. Bassist Tyler Long and guitarist extraordinaire Joe Reinhart joined the band for the recording of their debut album as a full unit, 2012’s Get Disowned. Their powerhouse performances on tour earned them a dedicated following, leading Reinhart to stay on with the band full time. Quinlan and company continue to thrill audiences with their singular grunge folk sound, both on stage and on acclaimed albums like 2015’s Painted Shut.