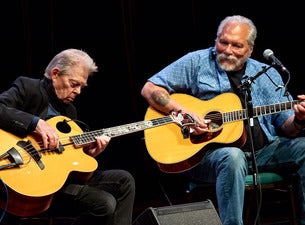 Blues rockers Hot Tuna may have come into being incidentally, but it's no accident that they continue to sell out tours year after year. Formed as a side project by members of Jefferson Airplane while frontwoman Grace Slick was recovering from throat surgery, the band quickly attained an identity of its own, outlasting its forebear and going on to achieve considerable success. The band has always been a live act first and foremost -- they've released more live albums than studio albums -- and they'll continue to bring down the house on their upcoming tour as they treat fans to classics like "Hesitation Blues" and "Hit Single #1."

At the height of Jefferson Airplane's success in the late '60s, the band took a break from touring as lead singer Grace Slick recovered from vocal cord surgery. Eager to continue playing during the hiatus, several  of the band's members began performing  as Hot Tuna, covering blues classics alongside Jefferson Airplane favorites. Eventually achieving its own identity with original material, Hot Tuna continued to be a powerful live force as the band that spawned it waned. Their self-titled 1970 debut, a live recording of a show played in Berkeley, set the tone for a catalog dominated by live albums. Continuing to perform today with original members Jack Casady and Jorma Kaukonen, Hot Tuna has fans eagerly awaiting their upcoming tour dates.

"Hot Tuna rocked the house... It was a non-stop banquet of electric blues and rock played with skill, generosity, and enthusiasm. The crowd was ecstatic, and I think the band was even happier."

"These men haven't lost a step, or a beat. Loved the songs from the album Burgers."

"For a group of older gents, these men really crank! Professional and passionate about their music, they filled the room with great sound and spirit!"