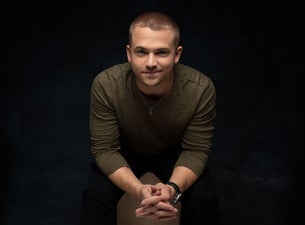 Baby-faced country star Hunter Hayes may be young, but he can hang tough with the best of 'em come showtime. The talented singer, songwriter, and multi-instrumentalist is a one man powerhouse, playing virtually every instrument and assuming production duties on his self-titled No. 1 debut. His precocity extends to the stage, where his silky croon and boyish good looks are matched by his equally impressive energy and showmanship. Hayes knocked fans' socks off at his shows in 2013, and with a sophomore album set for release in 2014, his upcoming tour dates are sure to be no different.

Born in Breaux Bridge, Louisiana, Hunter Hayes got an early start in music, taking up the accordion at age two and giving his first performances at age four. By age seven he had performed for Bill Clinton at the White House, and by age 13 he was singing away on America's Most Talented Kids. These would be end-of-career highlights for many performers, but for Hayes they were just the beginning. After opening for Taylor Swift on tour and penning songs for country icons Rascal Flatts, Hayes released his self-titled, self-produced debut album in 2011. The album peaked at No. 1 on the Top Country Albums chart and spawned several chart-topping singles, including his first No. 1 "Wanted." Since then, Hayes has racked up more awards and accolades than most performers twice his age, including a Grammy nomination for Best New Artist and a CMT Artist of the Year award.

" Hunter Hayes is fabulous live. He was such a great showman. Used the space incredibly well. Even my friend who doesn't like country loved the show."
"Hunter Hayes was so adorable, all I can say is that this show was for all ages and I would recommend it to anyone. He is so full of energy and puts on a great show that includes the audience!"

" He had so much energy... He didn't stop bouncing and jumping around for the entire 2 hours & 20 minutes he was on stage. Impressed by the length of the show, the clarity of the music and overall mood/attitude of the evening."