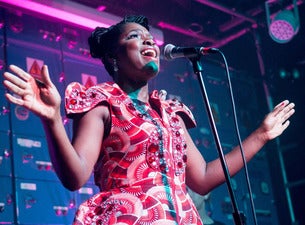 Nobody's quite sure how to describe their sound — is it Afro-electro? Afro-funk? — but labels aren't terribly important to Ibibio Sound Machine. They just aim to make people dance. The band hails from London, but its members were born all over the globe, and it's that eclectic mix that makes Ibibio's live shows so electric.

Known for bringing festival crowds to life even during sleepy afternoon slots, the group's performances have been described as exuberant and jubilant, and they owe that in no small part to Nigerian-English lead singer and lyricist Eno Williams, who is unquestionably a force of nature. She pens lyrics in English and Ibibio, translating her family's Nigerian heritage for dance-happy audiences around the globe. The 2014 Ibibio Sound System Tour introduced them to the world; the 2017 Uyai Tour cemented their reputation, and was followed by the 2019 Domo Mien Tour.

Ibibio Sound Machine were born in 2010 when Australian saxophonist Max Grunhard teamed up with Eno Williams, a London-born Nigerian singer raised in Lagos. Grunhard, part of the Afro-funk group KonKoma, was originally interested in fusing elements of Afrobeat with drum 'n' bass. Williams had always been a singer — she and one of her sisters were part of a quintet that performed in churches and school bands — but she'd returned to London to attend university, pushing singing to the side.

When she shared some songs and poems in the Ibibio language with Grunhard, though, it was clear they had something special. They assembled a group of percussionists, horn players, and synthesizer players and released their first (self-titled) album in 2014. The group may have pulled songs like "The Tortoise" and "The Talking Fish" from Ibibio folktales, but their inspirations flowed equally from Michael Jackson, Prince, and the Talking Heads, and that showed in the joyful fan reception they received.

Their 2017 release Uyai (Beautiful) opened with "Give Me a Reason," a spectacular ode to the Nigerian schoolgirls abducted by Boko Haram in 2016. Then 2019's Domo Mien saw the group continue to evolve their global brand of dance music.