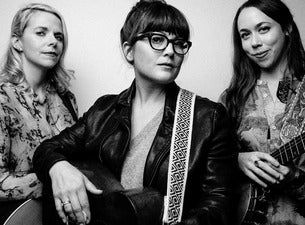 Boletos para I'm With Her

Acerca de I'm With Her

I'm With Her in Concert

But together they create a dreamy and poignant blend of bluegrass, folk, and Americana that floats high on their soft, silky harmonies. It's a sound that slowly came together after the trio adopted the name I'm With Her and took off for a European tour in 2015. Their first singles captured this magic, with the simmering John Hiatt cover "Crossing Muddy Waters" and the haunting a cappella rendition of Nina Simone's "Be My Husband."

They'd soon be regulars on the NPR radio show ‘Live from Here' (formerly ‘A Prairie Home Companion'), hosted by Watkins' Nickel Creek partner Chris Thile. Still, they struggled to find time between their busy solo schedules to finalize an album. Finally, they booked a remote farmhouse in Vermont in 2017 to come together to write. Soon after, they'd connect with producer Ethan Rounds to refine their sound and record in Box, England. By the next year, they released their debut studio album, ‘See You Around.' The whole set warms and soothes, sounding as ethereal as it does familiar. Fiddle, guitar, mandolin, and banjo intertwine, as their voices meld and melt together. It's a mix that's breathtaking on record, and heightened even further when all three share the stage, which they'd do yet again on their 2018 Overland Tour.