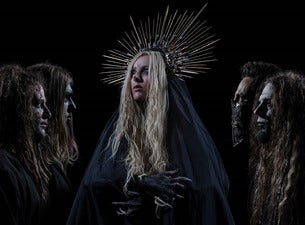 Boletos para In This Moment

Acerca de In This Moment

In certain serendipitous cases, a band’s name perfectly encapsulates their essence, and heavy metal rockers In This Moment are a case in point - the sheer power and immediacy Maria Brink’s vocals make it difficult to be anywhere else. Simultaneously vulnerable and snarling, Brink’s emotional growl is a focal point on 2012’s Blood, the band’s 4th – and most successful – album to date. Singles like “Blood” and “Whore” pulled no punches, landing the album at No. 1 on the Billboard Hard Rock chart and cementing Brink’s place as one of the dominant female voices in alternative metal. After forming in Albany in 2005, the band’s 2007 debut Beautiful Tragedy quickly made them a metal festival staple and the opening act of choice for bands like Megadeth and Rob Zombie. Their 3rd album, 2010’s A Star-Crossed Wasteland, was a crossover success, landing at No. 1 on the Independent Albums chart and spawning a hit with “The Promise”. On Tour in 2013, the band has been blowing ticket buyers away with their thundering live concert, pulling fans into the moment with Brink’s commanding presence.