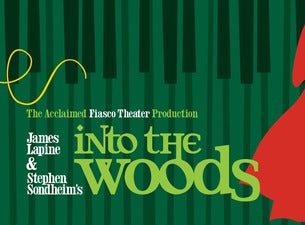 Boletos para Into the Woods

Acerca de Into the Woods

“TRULY ENCHANTING! THESE ARE THE WOODS THAT YOU WANT TO GET LOST IN, A PLACE YOU’LL FIND BURIED TREASURES THAT YOU DIDN’T EVEN KNOW EXISTED.” – Ben Brantley, The New York Times

Venture back INTO THE WOODS with the acclaimed Fiasco Theater production that the Associated Press called “ingenious and bewitching.” Unanimously praised and extended twice at Roundabout’s Laura Pels Theater, the Tony Award®-winning musical classic by Stephen Sondheim and James Lapine has been mounted with boundless imagination. This witty and wildly theatrical re-invention, produced by the Dodgers (Jersey Boys, Matilda) and NETworks Presentations (The Phantom of the Opera, War Horse, South Pacific), is INTO THE WOODS as you’ve never seen it before!

Including dazzling songs like “Children Will Listen” and “No One Is Alone,” this thrillingly clever new version made Ben Brantley of The New York Times fall “head over heels.” Mind the wolf, heed the witch and honor the giant in the sky at this extraordinary musical about the power of wishes and what really happens after they come true.

“GORGEOUS. Into the Woods not only features a giant but IS ONE. In perhaps its most surprising reconfiguration yet, Fiasco’s production highlights the way people fight with their fate rather than just succumb to it. GENIUS.” – Jesse Green, New York Magazine