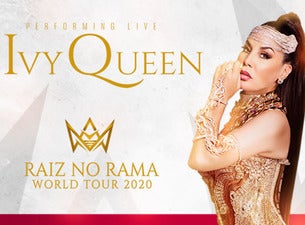 Dubbed "The Queen Of Reggaeton," Ivy Queen is one of the only women to make it in the male-dominated raggae genre. It's no wonder, as Ivy owns a three-decades-long career mixing hip-hop, rap and reggae into anthems of female empowerment and standing up for what’s right. She tours with an all-male backing band who give her live concerts a powerful punch. But there’s no question who’s in charge, as Ivy struts around the stage and delivers her signature tough, uncompromising vocals. It’s the same sound that can be heard on her latest single, "Peligro De Extinción" from the 2012 album Musa, which earned Ivy her third nomination for Best Urban Music Album at the Latin Grammy Awards.
It’s only the latest success for Ivy Queen, originally known as Puerto Rico's Martha Ivelisse Pesante Rodríguez, a woman who has always forged her own path. In 1995, when she was just 22, Ivy Queen joined her first band, rising stars of the newly founded reggaeton scene, the Noise. Ivy was the only woman in the group, but she quickly became frustrated with all the violent and sexual themes in the genre's music and decided to branch out into a solo career. She scored a minor hit with 1999’s “In The Zone,” featuring Wyclean Jean. However, it was when she chose to set aside the restrictions of her label and start releasing independently that things really started happening. Her next three albums, Diva, Flashback and Sentimiento, all went platinum, with hits singles like "Cuentale," "Dime" and "La Vida Es Asi." Soon, she was selling tickets all over the Latin world and the U.S. She's currently working on a follow-up to Musa, which is expected to be released in February 2014.