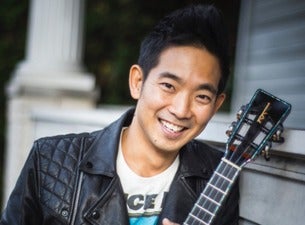 In a way, it’s Hawaiian ukulele player Jake Shimabukuro’s live performances that first brought him international attention — in 2006, Shimabukuro’s success skyrocketed after a video of him playing The Beatles’ “While My Guitar Gently Weeps” became one of YouTube’s first massively viral videos. Ever since, he’s shared his joy of music with audiences all over the world, playing songs that range from jazz and classical to rock and bluegrass. Before he blew up, Shimabukuro was signed to a label in Japan and toured the country extensively. After starting his own label and playing more U.S. shows, he’s appeared on a number of talk shows with hosts like Conan O’Brien, Jimmy Kimmel and Carson Daly. Now, Shimabukuro tours the world frequently, often leading a versatile string trio that includes guitar and bass, though he’s also been known to groove in a quartet with drums, keys and bass. Jake Shimabukuro’s current tour takes him across the U.S. as he continues to find new ways to interact with the styles that have made him the musician he is today.

Jake Shimabukuro is a Hawaiian-born, fifth-generation Japanese American ukulele player who has become known as a virtuoso musician that can jam in almost any style. Born in 1976 in Honolulu, Shimabukuro received a ukulele from his mother, a musician herself, at age four. He studied with her for years, eventually entering the Roy Sakuma Studio and taking lessons from Tami Akiyami. In the 1990s, Shimabukuro would become a member of the trio Pure Heart alongside percussionist Lopaka Colón and guitarist and singer Jon Yamasato. The group’s first album, 1999’s Pure Heart, won four Na Hoku Hanohano awards — basically the Hawaiian Grammys — including Contemporary Album of the Year, Most Promising Artist, Album of the Year and Favorite Entertainment of the Year.

Shimabukuro signed with Epic Records International, a division of Sony Music Japan, in 2002. He toured in Japan and released a number of Japan-only albums. Wanting to share his music with the U.S. as well, Shimabukuro founded Hitchhike Records and soon released 2005’s Dragon, which charted at No. 5 on Billboard’s Top World Music Albums. The following year, after his YouTube success, he released Gently Weeps, which peaked at No. 2 on the Top World Music Albums. Shimabukuro has gone on to release numerous high-charting albums.