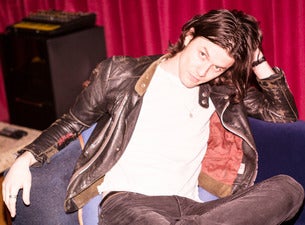 British folk singer-songwriter James Bay is quickly making a name for himself with his gravelly voice, heartrending lyrics, and no-frills live performances. The fresh-faced young musician leverages minimal elements to maximum effect at his live shows, achieving big emotional impact with little more than his soulful voice and acoustic guitar. Whether he's belting out "When We Were On Fire" or encouraging fans to sing along to "Move Together", Bay's energy and charisma always make for a rousing concert experience ticket buyers won't soon forget.

James Bay, born in Hitchin, UK, picked up his first guitar at age 11, teaching himself to play with the help of a CD-ROM guitar tutorial. He began writing pop songs in his teens, taking inspiration from artists like Eric Clapton and the Black Crowes while honing his own unique sound. In 2013 he released his acoustic debut EP The Dark of the Morning, an impressive collection of soulful folk recorded live at the Swamp in London. The album displayed his knack for penning sparse yet powerful songs, and artfully-crafted tunes like "Move Together" drew praise from critics and fans alike. Bay followed up in 2014 with the Let It Go EP, which featured a full backing band -- a development that has fans eagerly awaiting the chance to see Bay and Co. on their future tour dates.